amika was born and raised in Brooklyn (specifically Bushwick), a hub of creative thinkers, artists, and entrepreneurs. This borough is where we pull a lot of our inspiration from, because it’s the place we call home. Brooklyn has no shortage of new and unique ideas when it comes to just about anything, but especially businesses. In our “Brooklyn businesses we love series”, we’ll be passing the mic to small-business owners thriving and living out their dreams. Here they’ll talk about their come up, lightbulb moments, successes, failures, lessons learned, and advice.

Today we’re speaking to the owner of Third Cult, a leather goods business based in Bushwick. 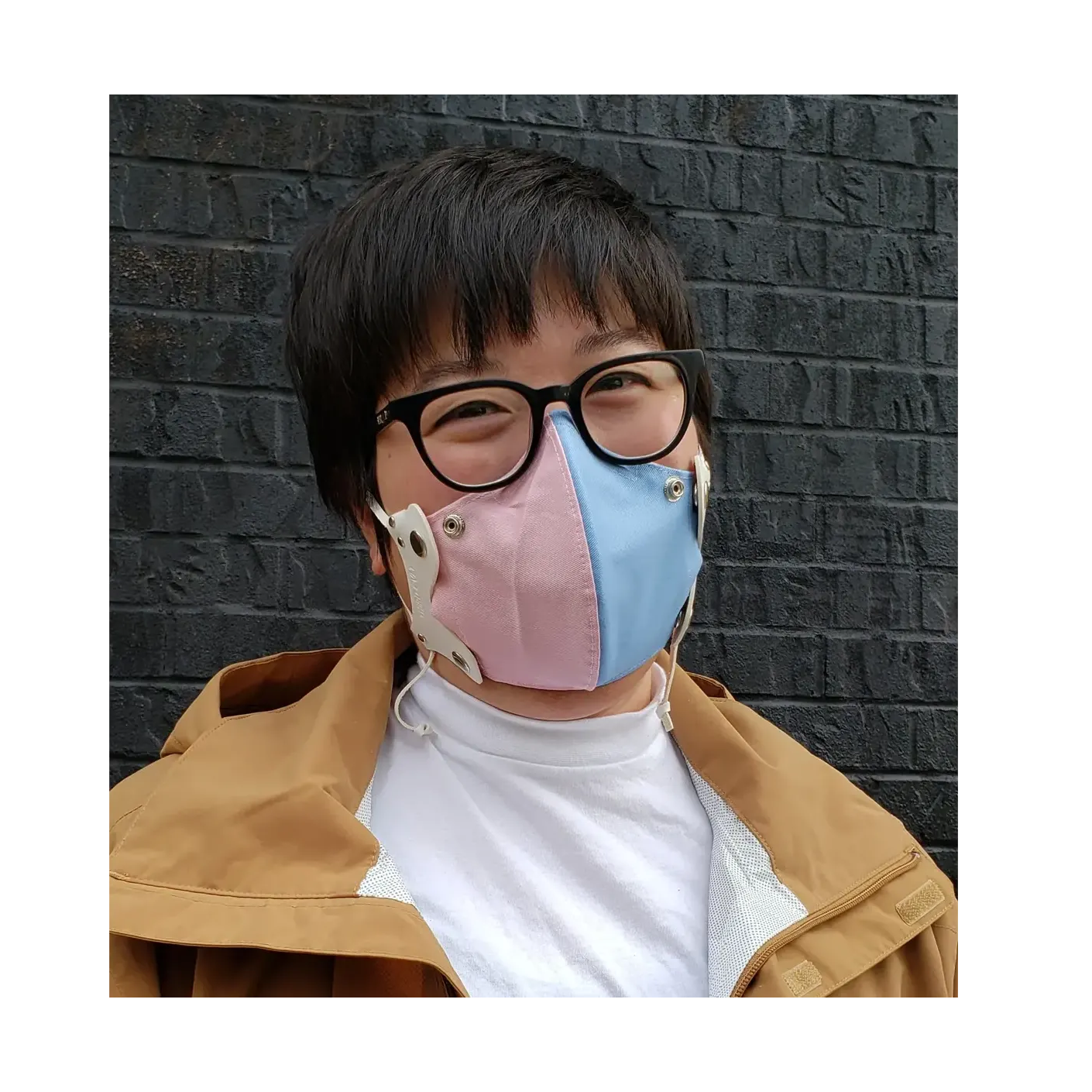 “Hi! My name is Stella, pronouns are she/they. I’m a queer, non-binary, Chinese American designer operating out of a small studio in Bushwick, Brooklyn.

My family originally immigrated to the US from Hong Kong in the late 60’s by way of Chinatown, Manhattan. My parents took a detour to Boca Raton, FL when they worked for IBM in the late 70’s, and that’s where my sister and I were born. However, much of our extended family remained in New York City, especially my grandparents who continued to live in Chinatown.

So I guess you could say my journey back to NYC in 2012 was a journey home. Ultimately, I chose Bushwick for its flourishing art and music scene and I’ve been here ever since.”

what was the process like of bringing the idea of Third Cult to life?

“Third Cult started out as a name. As a person encompassing many identities, the concept of third culture resonates with me.

Third Culture Kids: Citizens of everywhere and nowhere. An amalgamation of cultures.

During my previous life as a chef, I picked up leatherwork as a side hustle for a small leather goods company. I tinkered with projects and found my design identity along the way. I lent it the name Third Cult. What started off as a pair of custom backpacks grew into vendor markets, a growing queue of commissions, and a rotating line-up of new products. I love making a unique item and keeping a mental rolodex of who stops by my table. It’s like people watching, but amplified! If a random cross section of people pick up one of my bags without any seeming correlation to gender, age, race, or orientation, I chalk that up to a huge success. I spend a lot of time thinking about how humans can express their identity through presentation and I really love the idea of making a piece that resonates with someone enough that they want to incorporate it into their own personal style.

have you had an “I’ve made it!” moment yet? if not, what will make you feel like you’ve made it?

“I feel lucky this year to have figured out how to survive the pandemic. Third Cult mask sales not only paid the bills, but gave me a little extra to pay it forward with a few fundraisers and a small runway to transition to the future. I’m so grateful.

That being said, I really want to have a brick and mortar store. I want to be a shopkeeper. I want to have a permanent place to display all my goods and I want to have space to curate my friends who make beautiful work too. I want a counter full of third culture snacks and a fridge full of third culture drinks. I want a space, a third space if you will...to build community. For those of who aren’t sure who they are or where they belong yet and those that do too! An open and welcoming space, enough money in the till to pay the bills, keep making stuff, and create a place that anchors you and feels like home. That is when I will feel like I’ve made it.”

tell us about a moment when you wanted to give up or felt you failed but pushed forward and persevere.

"It takes a lot of resources to put yourself out there; throwing down on the pricey weekend fee for a market, ponying up the money for materials, estimating how much stuff to make, putting the extra hours in to get that stuff made, making sure your POS is working correctly, getting your packaging together and cohesive, schlepping, packing and unpacking the display and signage. Most small biz owners do everything on their own in the beginning. That takes a lot of energy, both mentally and physically. Sometimes on top of that, things don’t go your way during the actual market weekend. I’ve had markets where I’ve cleaned up and sold most of my inventory, and others where I was just grateful to break even. But when you show up and nobody else shows up, or the vibes are bad, or the weather turns sour, it’s easy to question, “what am I even doing here?”. I’ve had a whole weekend of low to zero traffic only to have my new best customer roll through at the end and take half the things off the rack after closing time. I guess what I’m trying to say is, stay curious. There might be something after the credits roll.” 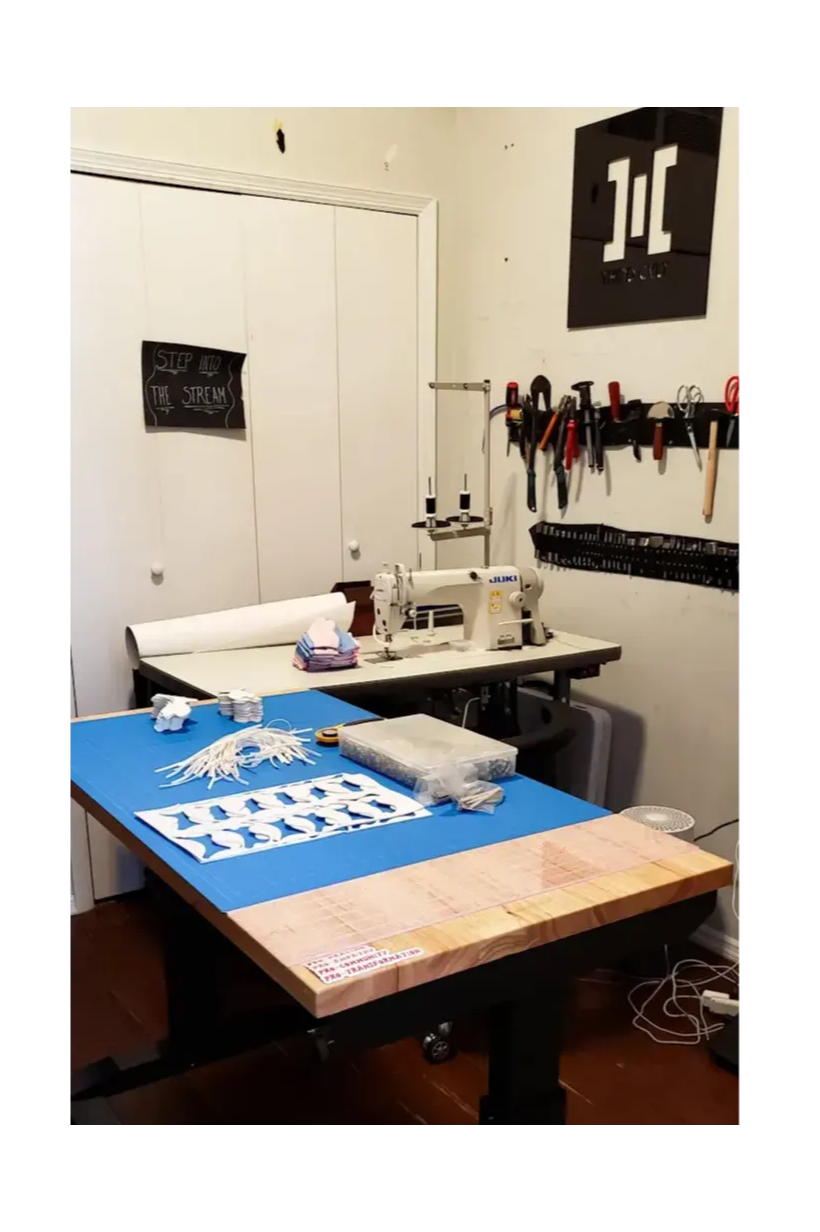 “A hard learned lesson for me was how to let go of non-constructive criticism. I’m still working on it. This manifests in many forms. If you look different, act different, do something different from the norm, people are going to have opinions. Learning how to differentiate between helpful and necessary feedback, as well as toxic doubt is impossible when you are very close to a project. Zoom out and re-evaluate, that’s the lesson.”

what was the inspiration behind your newest mask launch?

“This mask launch is inspired by the Trans flag. The flag is a horizontal white stripe representing intersex, transitioning or a neutral/undefined gender with 2 equal stripes of light pink and light blue on either side, the traditional colors used to gender babies.

I also want to raise funds for trans youth in celebration of International Trans Day of Visibility.

100% of the profits from this mask will be donated to the Trevor Project.

In return for your donation you get a cute mask to rep and you get to underline your support for the trans community! It's a pretty sweet deal.” 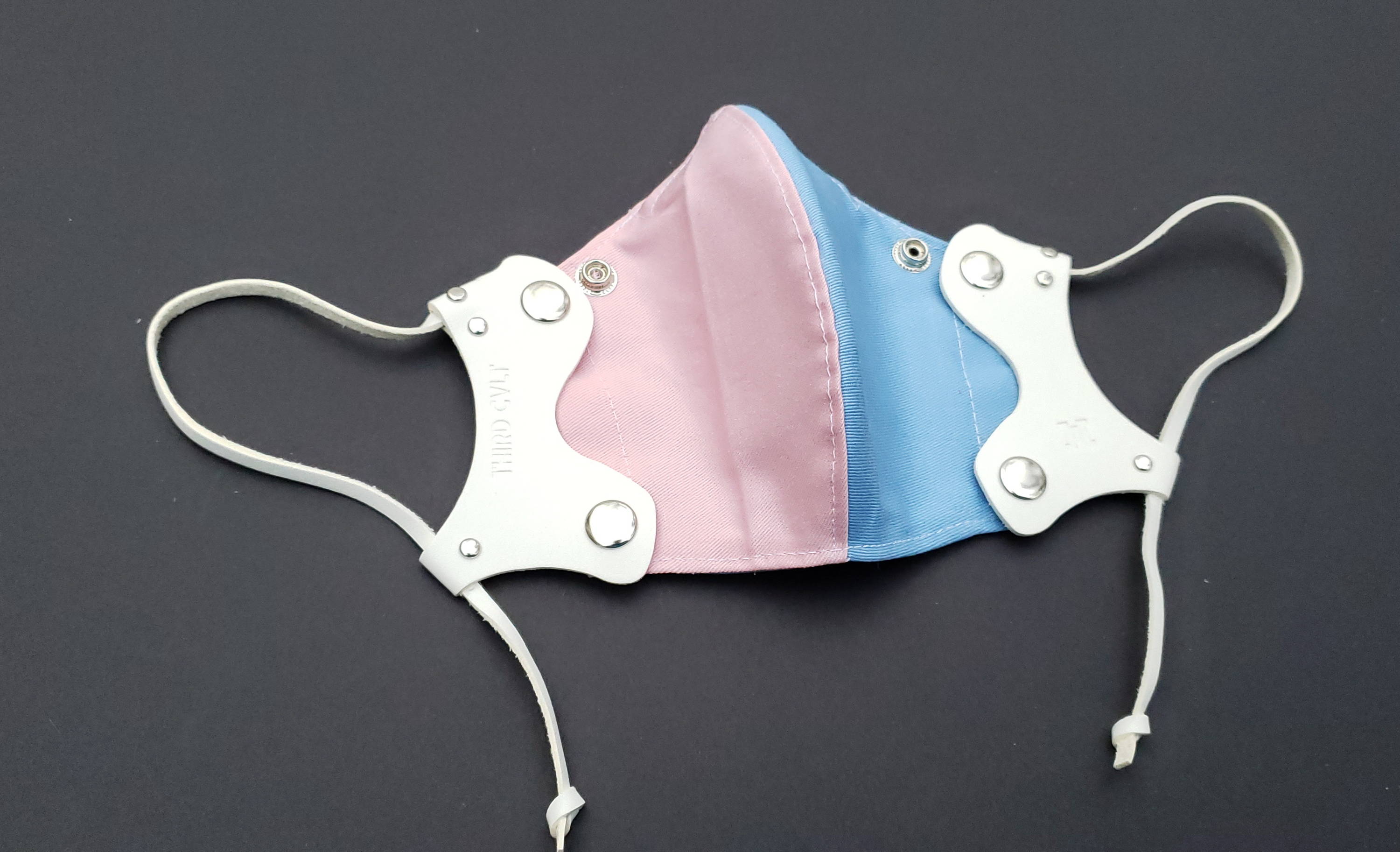 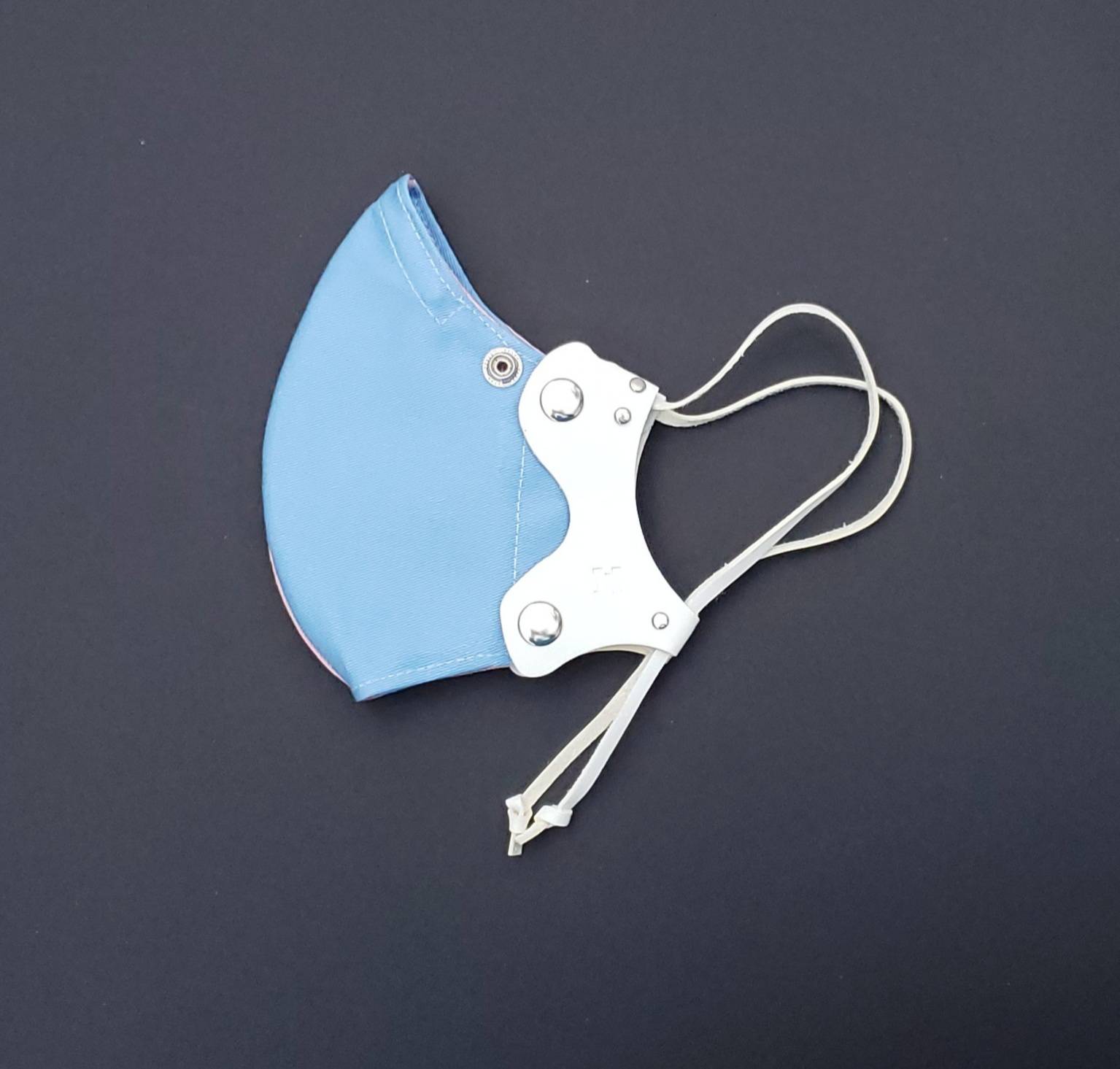 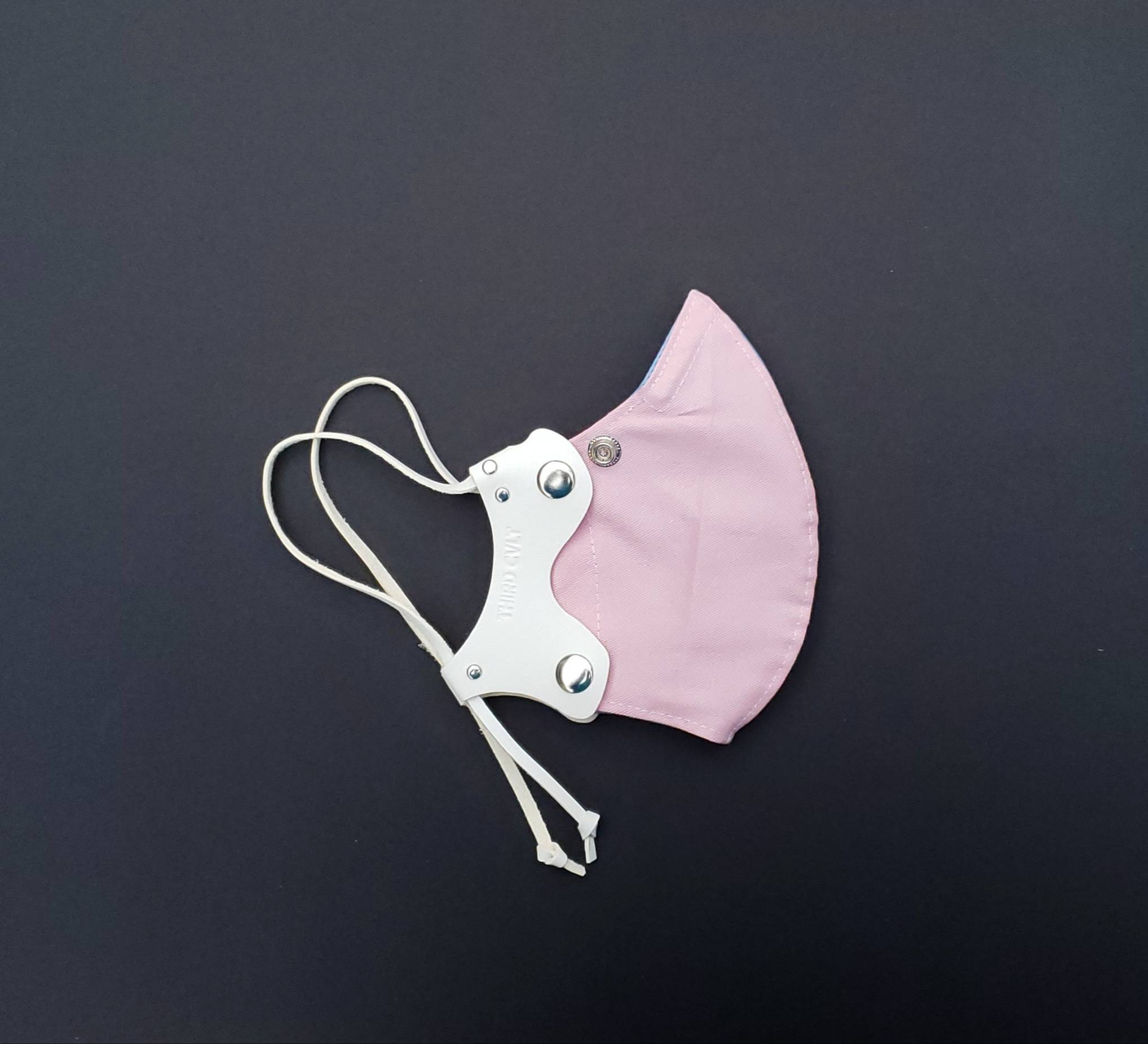 why did you choose the Trevor Project?

“The Trevor Project is a national program targeted to and on behalf of LGBTQ youth age 25 and under. It is most well-known for the Trevor Lifeline, a 24/7 crisis intervention and suicide prevention hotline. However I think the outreach and support programs of this organization are also so important because empowering people with language and community is so important. I wish cohesive literature and information existed like this when I was growing up. Our LGBTQ kids, especially trans kids need to know that they are not alone, what they are feeling is normal, and that they can be loved and accepted for who they are. I especially feel so much love and appreciation for the educational outreach program targeted to the parents. Educating parents about gender identity and sexual orientation and opening up a line of communication with their children can actually mean the difference between life or death.”

what’s one of the most challenging aspects of being a small business owner?

“Budgeting! Being self-funded is definitely the most challenging aspect for me. You really have to have a vision and trust that you can bring an idea to fruition. It’s like buying stock in a company that has only released proof of concept. I have so many ideas, so many things I want to make, but you also have to factor time and money into the equation.”

do you have any words of advice for aspiring entrepreneurs?

Also, word of advice to the marketplace: trust that an artist did their due diligence and has set their price to reflect the labor, materials and design work fairly. If it’s out of your range, carry on with your life. Courtesy works both ways.” $55.00 away from free shipping!
Your cart is empty
Continue Shopping